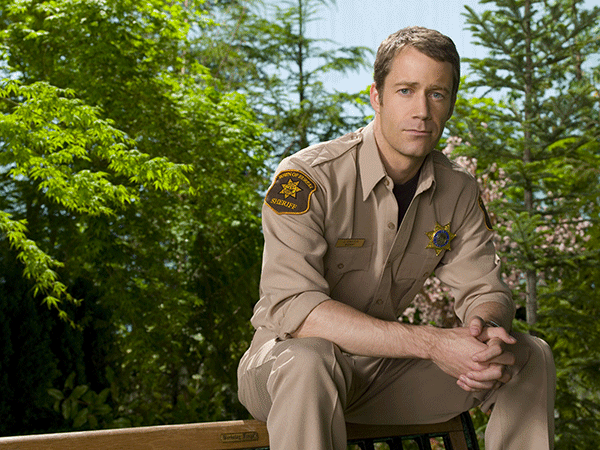 Actor/director/producer Colin Ferguson can be seen in the Syfy show “Haven”, opposite Emily Rose, Lucas Bryant, Nicholas Campbell and Eric Balfour. He is also currently on “The Vampire Diaries” as Tripp, the disciplined head of the community militia who will stop at nothing to protect his town. He is best known, however, for his role as Federal Marshal Jack Carter in the highly acclaimed SyFy dramedy “Eureka.”

Born in and raised in Montreal, Colin spent his childhood in Hong Kong, England, Connecticut and Toronto. He got into comedy to make money to put himself through McGill University performing in stage comedy that won top awards at the Just For Laughs festival four years in a row. This led to a stint as a founding member of Detroit’s Second City franchise which he ultimately left to go back to University and finish his degree.

Colin worked a variety of occupations before he turned to acting full-time. He worked on the assembly line at several General Electric light bulb factories (parent company of NBC Universal and SyFy). And 20 years later he is still working for the same company…”the hours are worse but the pay got better”.

Colin’s feature-film credits also include “Because I Said So”, “Rowing Through,” and “The Opposite of Sex” among others. He was a regular on the NBC remake of the hit British comedy series “Coupling” and the sitcom “Then Came You”. His many guest-starring roles include “Line of Fire”, “Malcolm in the Middle”, “Crossing Jordan”, “Becker” and “Titus”. Additionally, Colin has starred in other television movies such as “Mom at 16″, “We Were the Mulvaneys”, “Confessions of a Sociopathic Social Climber”, “Ladies Night”, “More Tales of the City”, “Playing House” and “Christmas in Paradise”.

Colin was a producer on Eureka and directed the “fan favorite” episodes “Your Face or Mine” and “The Story of O2.″ He has repeatedly been tapped by SyFy to bring a more human and character- based element to their typical visual-effects heavy style. It is the marriage of Second City’s character-based approach to scene work and television’s economic plot movement that defines his directing style and approach.

“I like a story that moves. I like a story that’s driven by a situation created by the reality of its characters… and as for comedy I’m just contrary – I like the comedy in my drama and the drama in my comedy.”

[sched sidebar=”no” url=”https://comicconhonolulu2016.sched.org/overview/type/Guest+Event/Colin+Ferguson”]Comic Con Honolulu Schedule[/sched]
Comic Con Honolulu will be back August 7-9, 2020! Follow us on FB for the latest updates!