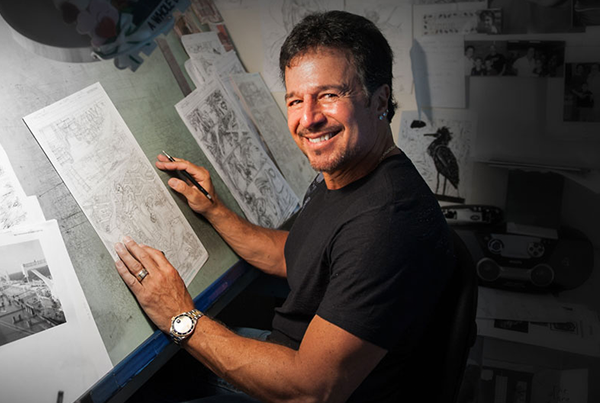 John Salvatore Romita commonly known as John Romita Jr. or JRJr is an American Comic Book artist best known for his extensive work for Marvel Comics and DC Comics from the 1970s to today. John is the recipient of both the Inkpot Award as well as the Eisner Award. John is married and has one child with his wife Kathy.

Born in Brooklyn, New York, John discovered his love for drawing from watching his father, John Romita Sr., draw legendary Marvel characters such as Daredevil and Spider-man. JRJr studied and graduated with a degree in advertising art and design at Farmingdale State College in East Farmingdale, New York. But it was from there that he turned his career to comic books like his father.

The Romita Legacy as it has become known, continues as JRJr continues to hone his craft as not only an amazing artist but today is considered one of the very best storytellers in the comic book industry. Some of the many titles that he has worked on include The Amazing Spider-Man, Iron Man, Kick-Ass, Superman, Batman and Daredevil to just name a few. And in the process he has created numerous memorable characters such as: KickAss, Hit Girl, Hobgoblin, The Prowler, Madame Web, Dazzler, and his always favorite Typhoid Mary.

John’s first contribution to Marvel Comics was actually at the young age of 13 with the creation of the Prowler in The Amazing Spider-Man #78 (Nov. 1969). He began his long career at Marvel UK, doing sketches for covers of reprints. His American debut was with a six-page story entitled “Chaos at the Coffee Bean!” in The Amazing Spider-Man Annual #11 (1977). His early popularity began with his run on Iron Man with writer David Michelinie and artist Bob Layton which began in 1978. The creative team introduced several supporting characters, including Stark’s bodyguard girlfriend Bethany Cabe and rival industrialist Justin Hammer. But it wasn’t until the early 1980s, John started his first regular run on The Amazing Spider-Man.

While at Marvel, John worked on many of Marvel’s most popular titles such as Avengers, Thor, Captain America, Black Panther, Incredible Hulk, Punisher and Wolverine. Also included was several runs on Uncanny X-Men, which he said he enjoyed working with writer, Scott Lobdell. But from 1988 to 1990, JRJr had an extended run on Daredevil with writer Ann Nocenti and inker Al Williamson, which included the creation of long-running Daredevil nemesis Typhoid Mary. For Romita himself, his run on Daredevil was most significant for being both the first time he was allowed to do full pencils instead of just breakdowns, and the first time he had a working relationship with the writer on a series. He remarked that “I finally felt like I was part of the creation process for the first time while I was on Daredevil.” After Daredevil #282, Romita left the series to pursue other projects but later returned to Daredevil to work on Daredevil: The Man Without Fear in 1993 with Frank Miller and Al Williamson.

In 2001, Romita returned to Spider-Man for a collaboration with writer J. Michael Straczynski beginning with The Amazing Spider-Man vol. 2 #30. The creative team produced a story for issue #36 (Dec. 2001) that served as memorial to the victims of the September 11 attacks.

In the middle of Times Square, May 2002, at the encouragement of John’s wife, Kathy, John set a world record while helping to raise money for his niece during the “Saving Baby Jordan” event. John and Kathy’s niece, Jordan had developed a rare brain cancer as an infant. So to raise money to help pay for some of Jordan’s medical bills, John pushed himself to continuously sketch characters and sign comics for 48 hours straight. It was Kathy who kept the coffee flowing and John’s hands moving. Proudly, Jordan is now a healthy young woman, who is a beacon of hope for Childhood Cancer Survivors, thanks to John and especially Kathy’s hard work.

In 2006, Romita collaborated with writer Neil Gaiman on a seven-issue miniseries reinterpretation of Jack Kirby’s characters the Eternals. He also collaborated with Mark Millar, for a creator-owned series, Kick-Ass, published by Marvel’s Icon imprint. This was later adapted into the 2010 film Kick-Ass. John, one of the producers, directed an animated flashback sequence in the film.

On May 4, 2012, John set out to break his own record for continuous cartooning, to support the charity Candlelighters Childhood Cancer Foundation of Nevada. He attempted to continuously sketch characters and sign comics for 50 hours straight while on the Las Vegas Strip.

In 2014, JRJr made a big change and decided to work for DC Comics and he became the penciller of DC Comic’s flagship title Superman, starting with issue #32, in collaboration with writer Geoff Johns. Then in 2016, JRJr joined writer Scott Snyder and collaborated on the All-Star Batman series as part of the DC Rebirth relaunch. He then worked with writer Dan Abnett, together they created The Silencer series as part of DC’s “Dark Metal” line. Today, John is again working with Frank Miller on what is being called DC Comics biggest project yet, Superman: Year One.

John Romita Jr Autograph and Photo Policies & Prices All prices are tentative and subject to change. Guests may change prices up to and at the convention.
Comic Con Honolulu will be back August 7-9, 2020! Follow us on FB for the latest updates!