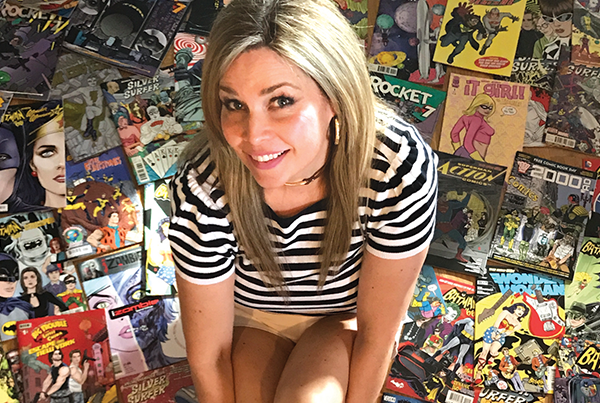 Michael and Laura Allred have been together from the moment they met (it’s a wild story if you can pry it out of them), and their union has been increasingly creative ever since.

Michael has drawn virtually ever major character in comics and has had great success with his own creations, Madman, Red Rocket 7, The Atomics, and iZombie (with co-creator Chris Roberson). And Laura is always right there coloring almost everything he does.

Their work has been celebrated with numerous awards including The Eisner, Harvey, Wizard, MTV Fan Award, and the Inkpot (which comes with a lifetime Golden Ticket to San Diego ComiCon).

They are the official cover artists for all Adam West Batman projects, and won the Eisner for Best Comic of the year for Silver Surfer with writer Dan Slott on their latest epic project.

Most recently they’ve been attacking music related projects involving The Beatles, David Bowie, and The Monkees, and are returning to their beloved Marvel Mutants (X-Force/X-Statix) with co-creator Peter Milligan.
Their X-Force was hilariously featured in the Marvel flick DeadPool 2 via their creation Zeitgeist.

In addition to his art related projects, Michael is also singer and guitarist for the band The Gear, and he likes to swing a saw and hammer on construction projects with his carpentry skills when time allows, while Laura enjoys hosting a couple AirBnB properties near the University of Oregon to show off her design skills.

Laura Allred Autograph and Photo Policies & Prices All prices are tentative and subject to change. Guests may change prices up to and at the convention.
Comic Con Honolulu will be back August 7-9, 2020! Follow us on FB for the latest updates!